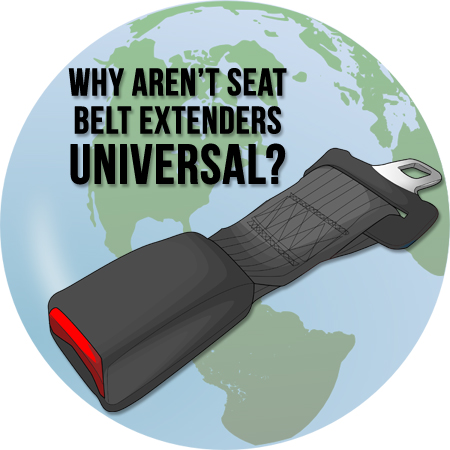 A World of Seat Belt Extenders

Isn’t that the million dollar question!? If there were a universal seat belt extension our jobs would be so much easier. Here’s why:

If only there were a universal seat belt extender that fit in every single car on the road!

But, alas, there is no such thing as a universal belt extension. Why, you ask?

With over fifty different car manufacturers, many of whom have been making cars for half a century or more, there is little or no standardization in the seat belt arena.

That’s the attitude that resulted in the literally hundreds of metal tongues we’ve identified across thousands of different vehicle models in varying years and seats.

So what we’ve done is pursue the fewest number of  seat belt extender Types that we possibly can to be the most likely fit in the widest variety of seat belts in the world. That makes our extenders not only the world’s most universal even if no single one is actually universal but also gives us the widest variety of extenders in the world to cover the most metal tongues possible.

Because we appreciate the challenges in you finding the most likely fitting extender for your vehicle - even if you  Shop by Your Car - we stand behind everything we sell on our website with free shipping, free returns and a 365 day return period. You get the extender how you want it or your money back with no costs of any kind on you.